In a lengthy decision handed down yesterday afternoon, the National Party was found to have infringed copyright in Eminem’s iconic song ‘Lose Yourself’ and was ordered to pay $600,000 in damages to Eight Mile Style, Eminem’s publishers.

The decision caps off a legal process that began during the lead up to the 2014 parliamentary election. The National Party put out a series of televised election advertisements featuring an instrumental track with a striking resemblance to ‘Lose Yourself’. The ‘sound-alike’ track was sourced by the National Party’s advertising consultants from the Australian music supplier BeatBox, who marketed the track as ‘Eminem-esque’. Eight Mile Style alleged that the ‘Eminem-esque’ track was an infringing copy. By using the track in its advertisements, Eight Mile Style said, the National Party was liable for copyright infringement. The High Court agreed.

With the assistance of two eminent musicologists who acted as expert witnesses for the respective parties, the judge broke down the two musical works into their component parts (sonic bed, piano figure, drum patterns etc) and assessed the similarities and differences. After negotiating the presumably unfamiliar landscape of duple metre, hooks, and ‘feel’, she concluded that the two works were ‘strikingly similar’.

The National Party argued that ‘Lose Yourself’ was made up of borrowed, commonplace musical components, and had such a low level of originality that another work only had to be minimally different to avoid copyright infringement. The National Party tried to confine the originality of ‘Lose Yourself’ to the melody, arguing that as the melody of ‘Eminem-esque’ was different there was no infringement. The judge rejected this argument, finding that ‘Lose Yourself’ was a highly original musical work that had been copied by ‘Eminem-esque’.

The damages award of $600,000, which is high by New Zealand standards, was calculated on the basis of reasonable royalty rate rather than on actual damage suffered by Eight Mile Style. This size of the award in part reflected the fact that ‘Lose Yourself’ has been licensed only rarely to preserve and increase its rarity and value. Further, Eight Mile Style imposes strict creative controls on any licence.

Eight Mile Style has sued several parties (including Beatbox) in relation to the creation and use of ‘Eminem-esque’, but its case against the National Party ran ahead of the other claims. The National Party was presumably chosen so that this case would serve as a powerful deterrent to potential infringers.

Certainly, we expect this decision to send a chill down the spine of companies that produce musical works for commercial use. Sound-alike tracks are common in advertising and on movie soundtracks, and are created precisely because they call to mind another popular (and more expensive to obtain) musical work. This decision highlights the risks involved in creating a work with another work in mind. Every creative field is built on what others have done, but the line between inspiration and infringement can be fine and the judgement of that line very difficult.

This case doesn’t necessarily break any legal ground, but it is important for New Zealand as we have very few musical copyright decisions to guide us on how two musical works should be compared to assess whether there is copyright infringement. To the layperson, decisions in these cases can seem somewhat arbitrary: why was Led Zeppelin found not to infringe copyright in the instrumental ‘Taurus’ with the opening riff to ‘Stairway to Heaven’, but Men at Work’s ‘Down Under’ was found to reproduce two bars of the classic Australian children’s song ‘Kookaburra sits in the old gum tree’? However, the similarity between two musical works may be buried at a level not immediately apparent to the casual listener and expert evidence from musicologists is often needed to uncover and explain this for the court, as was the case here. A positive outcome of this decision is that it provides those of us who advise people in the creative industries with guidance on how to assess whether the line between inspiration and infringement has been crossed.

We haven’t heard the last on this case. The National Party may appeal, and in the meantime has lodged a claim against the suppliers and licensors of ‘Eminem-esque’ who apparently advised the National Party that the track was safe to use. Eight Mile Style is also suing various other parties including music production library Beatbox, and so this particular legal gift may keep on giving to those of us who watch this area of the law with interest.

An edited version of this article first appeared on The Spinoff website here. 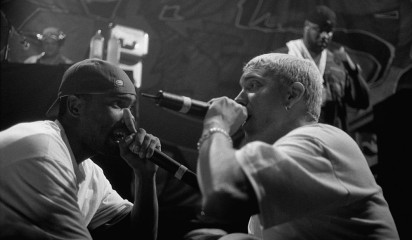