In our patents are a virtue series, Anton Blijlevens and Jillian Lim share a new patent that can help in emergency situations when a bandage is not enough to prevent haemorrhage from a large wound.

In many emergency situations, a bandage is not enough to prevent haemorrhage from a large wound. The inventor, Charles Kerber, of US patent 8,858,593 describes a device which inserts an expandable bandaging material directly into a wound, to quickly seal it, stop blood loss and reduce the risk of infection.

The device claimed has a tube and plunger. The tube contains a compressed sponge-like absorbent material and a separate break-seal vessel, such as an ampoule 24, containing a liquid which polymerises upon contact with bodily fluids. When the plunger is depressed, the sponge-like material is expelled into the open wound. At the same time, the break-seal vessel is broken, so that the liquid is also inserted into the wound, and diffuses within the sponge-like material, polymerising as it contacts blood and setting the material within the wound.

The patent describes various materials which may be used for the sponge-like filler, such as common surgical pads, gauze or absorbent bioabsorbable material. The specification also provides a list of suitable pre-polymer components which set upon contact with bodily fluids. 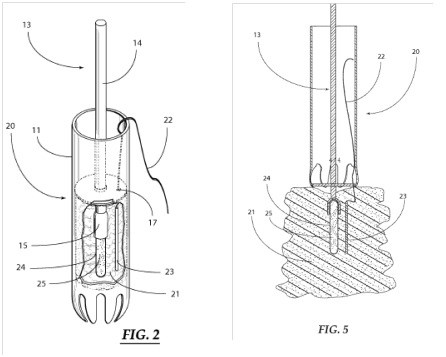 An edited version of this article first appeared on the Idealog website on 4 December 2014.