Is a registration regime for food-related geographical indications on its way?

A registration regime for foodstuff geographical indications (GIs) may soon be on the menu for New Zealand. If this happens, Prosciutto di Parma, Kalamata Olives and Feta will likely be struck off the menu, along with around 2,200 other product names.

Background to the proposed new regime

New Zealand (NZ) is currently negotiating a free trade agreement (FTA) with the European Union (EU). As part of the agreement, the EU has asked NZ to recognise a list of around 2,200 GIs and to adopt a new regulatory framework for the recognition of GIs in NZ.

Background to the FTA

In general, the EU-NZ FTA’s aim is to encourage bilateral trade in goods and services, remove tariff barriers and encourage foreign direct investment. As bilateral trade between NZ and the EU is worth nearly NZ$26 billion annually, there is strong motivation to achieve successful outcomes in the negotiations.

Of the $15.5 billion worth of goods exported from NZ to the EU in 2018, the majority of products were agricultural. Currently, the EU has high tariffs in place for these products and has adopted a protectionist policy in relation to its agricultural sector. NZ is a competitive producer of high-quality meat, fruit and wine, and would gain considerable economic benefit from the inclusion of these goods in an FTA.

The NZ government has released a discussion paper setting out details of the EU’s proposed framework for NZ and has asked interested parties to file submissions regarding these standards. The deadline for submissions is 24 April 2020.

In NZ, GIs can be registered only for wines and spirits. The regime is governed by the Geographical Indications (Wine and Spirits) Registration Act 2006 (the act), which came into force in 2017.

The act prohibits the unauthorised use of GIs for wines and spirits, even where the true place of origin is indicated, where the GI is used in translation, or where the use of the GI is accompanied by words such as ‘kind’, ‘type’, ‘style’ or ‘imitation’. A person who contravenes these provisions is regarded as having contravened Section 9 of the Fair Trading Act 1986, which prohibits misleading and deceptive conduct.

In NZ, GIs for foodstuffs are protected by the common law tort of passing off, the Fair Trading Act 1986 and the Trade Marks Act 2002.

The EU’s proposed regulatory framework for GIs in NZ

The EU is proposing that NZ adopt a registration regime for foodstuff GIs that is similar to NZ’s GI registration regime for wines and spirits. Under the new regime, foodstuff GIs would be protected against reputational exploitation, misuse, imitation and evocation. Furthermore, administrative enforcement action would be undertaken by public authorities, not producers themselves.

The EU is also proposing that NZ only refuse the registration of GIs that are similar to earlier protected trade marks if the trade mark’s ‘reputation and renown and length of time it has been used’ means the use of the GI is likely to mislead consumers.

Furthermore, the proposal provides that the 2,200 GIs protected under the FTA (including Prosciutto di Parma, Kalamata Olives and Feta) will be prevented from being removed or challenged unless requested by, or cancelled in, the EU.

If the NZ government agrees to these proposals, its current GI regulatory regime will be transformed. The legislative changes will likely have a significant effect on NZ’s agricultural sector and the way foodstuffs are marketed and sold in NZ.

And, who knows, in a few years, NZ consumers may have become quite used to buying ‘dry-cured ham’ instead of Prosciutto di Parma, ‘purple olives’ in place of Kalamata Olives and ‘white crumbly cheese’ instead of Feta.

This article was first published by Managing IP on 16 April 2020. Kathleen Henning is Managing IP’s international correspondent for New Zealand.

Invitation to consult about geographical indication protection in EU-NZ free…

The New Zealand Government is negotiating a free trade deal with the EU. As part of the agreement, New Zealand has been… 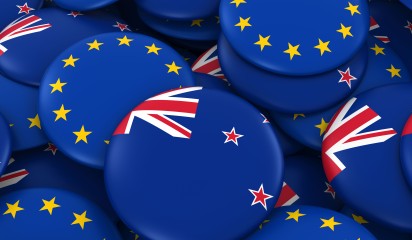